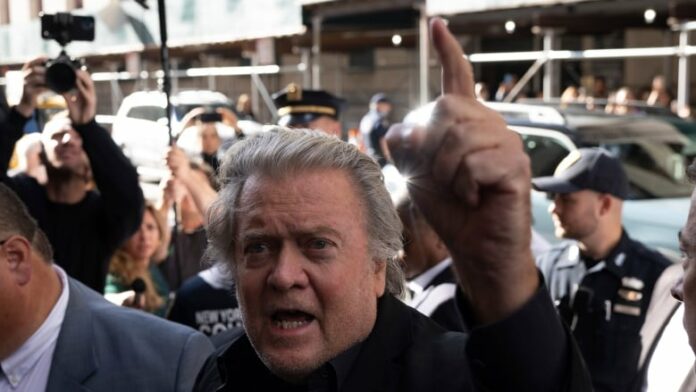 Steve Bannon, the longtime ally and one-time top strategist to former U.S. president Donald Trump, pleaded not guilty on Thursday to criminal charges for having allegedly deceived donors during an effort to help Trump build a wall along the U.S.-Mexico border.

Bannon, 68, entered his plea at a hearing in a New York state court in Manhattan, and was handcuffed behind his back as he entered the courtroom. The former campaign chair for Trump had surrendered to authorities earlier in the day. Bannon’s next court appearance was scheduled for Oct. 4.

Prosecutors accused Bannon of defrauding donors who contributed more than $15 million US to a private fundraising drive, known as “We Build the Wall,” for the former Republican president’s signature wall.

He was indicted on six counts in connection with the fundraising drive. In an indictment made public, Bannon was charged with two counts of money laundering, three counts of conspiracy and one count of scheming to defraud.

According to the indictment, Bannon promised donors that all their money would go toward the wall, but concealed his role in diverting hundreds of thousands of dollars to the drive’s chief executive, who had promised to take no salary.

The chief executive has been identified in court papers as Brian Kolfage, an Air Force veteran who pleaded guilty in April to federal wire fraud conspiracy and tax charges, and is awaiting sentencing.

“It is a crime to profit off the backs of donors by making false pretenses,” Manhattan District Attorney Alvin Bragg said at a joint news conference with New York Attorney General Letitia James, who worked with him on the probe.

“Stephen Bannon acted as the architect of a multimillion-dollar scheme to defraud thousands of donors across the country,” Bragg said in a statement.

Pardoned by Trump in federal case

Bannon, Kolfage and two other men had been charged by federal officials in August 2020 with defrauding donors in the same fundraising drive.

Bannon pleaded not guilty to the federal indictment, including to charges he diverted close to $1 million for personal expenses, but his indictment was dismissed after Trump granted him a pardon in the final days of his presidency in January 2021.

Presidential pardons cover federal charges and do not prohibit state prosecutions. Double jeopardy — which prevents a person from facing two separate proceedings for the same crimes — doesn’t apply to the Bannon case because there was never a verdict, or a trial, on the federal charges.

In a statement on Tuesday night, Bannon called the New York case “nothing more than a partisan political weaponization of the criminal justice system.” He made similar comments to reporters on his way into the court building in Manhattan on Thursday.

Bannon has championed right-wing populism for over a decade, beginning as an executive at Breitbart.com, where the site attacked moderate Republicans and immigration practices as they existed before Trump’s presidency, as well as emphasizing urban crime stories.

He signed on to become Trump’s final 2016 campaign chair, succeeding Paul Manafort, who eventually served a prison sentence for an assortment of bank fraud charges.

Bannon spent the first several months of Trump’s presidency as a White House adviser before leaving in August 2017.

He now runs the popular War Room podcast, and often hosts guests who deny that Trump lost the 2020 election to Joe Biden.

Bannon was convicted earlier this summer in a separate case for his refusal to answer a congressional subpoena from the House committee investigating the Jan. 6, 2021, attack at the U.S. Capitol.

He was convicted on two counts, each which entail jail time between 30 days and one year. He will be sentenced in that case on Oct. 21.

Bragg’s office is also overseeing a probe into Trump’s namesake company, the Trump Organization, which heads to trial next month. Trump Organization executive Allen Weisselberg, its chief financial officer, pleaded guilty in August to a variety of tax charges.