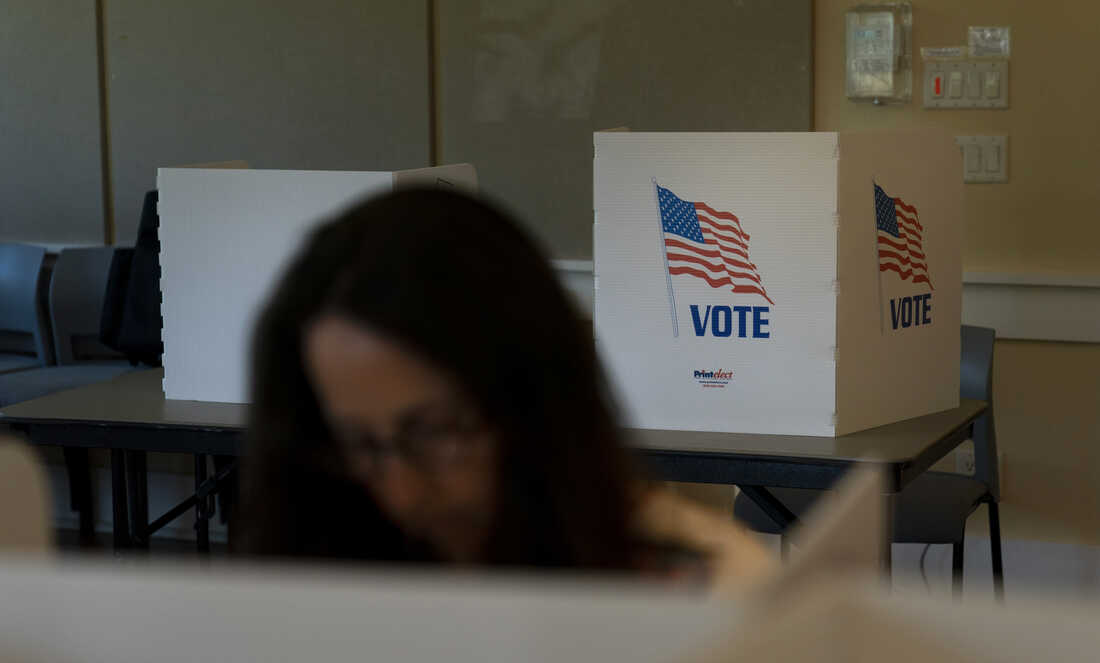 A voter in the foreground casts her ballot during the Republican primary election in Wilson, Wyo., on Aug. 16.

A voter in the foreground casts her ballot during the Republican primary election in Wilson, Wyo., on Aug. 16.

Wyoming’s likely next secretary of state, a Trump-endorsed Republican who has falsely called the 2020 election fraudulent, is drawing concerns from many of his fellow GOP lawmakers.

Now those legislators are aiming to draft a bill to remove the secretary of state’s ability to oversee elections.

State Rep. Chuck Gray is the Republican nominee for secretary of state in Wyoming. He does not have a general election opponent.

Though state officials — including outgoing Secretary of State Ed Buchanan — maintain Wyoming elections are secure, Gray campaigned on concerns that he has about election integrity. During the primary, he told television stations KGWN and KCWY that he wants to ban ballot drop boxes and oversee other reforms.

“We need all paper ballots,” he said. “The fact that a few counties have moved off paper ballots, I think is really wrong. And we need hand audits.”

Election deniers are running to control voting. Here’s how they’ve fared so far

Gray also stated during the campaign that he’d get rid of secretary of state employees who didn’t share his vision.

Gray’s proposals, coupled with his false belief that the 2020 presidential election was stolen from Donald Trump, have convinced a legislative committee to take action.

Republican state Rep. Dan Zwonitzer, who co-chairs the panel that deals with election laws in the state, told committee members he’s concerned that Gray could damage how Wyoming runs its elections, and he wants to change things.

“We may be in a precarious position when it comes to election administration for the next four years,” Zwonitizer said. “And I would feel more confident and comfortable, personally, having a separate operating agency of government made up of all five statewide elected officials who oversee a director of an office of elections.”

The committee approved his motion on a voice vote.

Deputy Secretary of State Karen Wheeler said the proposal would remove all election functions from the office.

“The Wyoming voter registration system, the campaign finance system, it would also remove anything to do with candidate filing and applications for nomination prior to running for office,” Wheeler said. “So there’s quite a bit that would go with it, if it were to be removed from this office.”

Republican state Sen. Brian Boner voted against creating a new election agency because Gray was nominated to handle all facets of the office. He added that lawmakers have oversight since election reforms would require legislative approval.

“I do understand some of the concerns,” Boner said. “I think Rep. Gray might have a hard time delivering on any of the promises that he made during the campaign season. But we also need to acknowledge the results of the election as well.”

Tracking Trump’s endorsements: Here’s how his picks have fared in primaries

Boner admits he is slightly concerned that Gray may decide to get rid of some key employees. One has already quit over Gray’s comments and the elections director is looking for a new job.

“I think you would need to ensure that staff remains that knows that system inside and out — knows if there is a glitch, how to fix it quickly,” she said. “These are complex systems, they aren’t something you buy off the shelf.”

Gray hasn’t commented on the proposed legislation. The committee will further discuss the issue and consider a draft bill when it meets in October.