More
HomeTop StoriesInternational aid for Pakistan flood relief should not be seen as charity,...

International aid for Pakistan flood relief should not be seen as charity, expert says 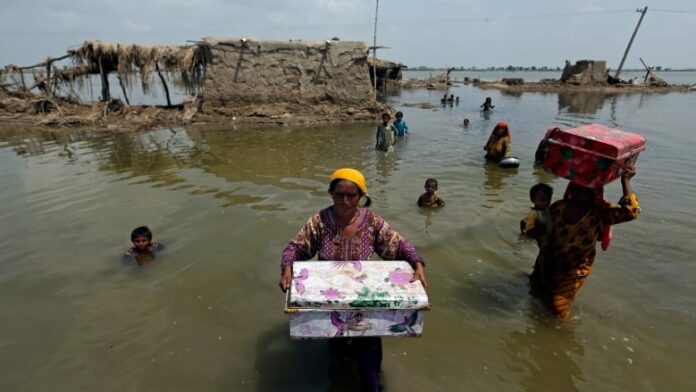 As NGOs and other nations scramble to help Pakistan deal with devastating floods, one expert is calling on others to remember the role of climate change — and the countries that contributed to it.

“When Europe was industrializing and other Western states were industrializing, we increased these emissions into the atmosphere by many, many magnitudes,” said Ayesha Siddiqi, a lecturer in Cambridge University’s Department of Geography.

“Of course, they’re resulting in all kinds of climate-related weather events, but this flooding is one of [those] weather events,” she told The Current‘s Matt Galloway.

The floods have been ongoing since mid-June. They’ve been described as “the worst in the history of Pakistan” by Prime Minister Shehbaz Sharif, and have taken the lives of at least 1,314 people.

Record monsoon rains and melting glaciers in Pakistan’s northern mountains have been blamed in part for the catastrophe. According to Pakistan’s minister of climate change Sherry Rehman, some provinces have received as much as 784 per cent more rainfall than the August average.

In an interview with The Guardian, Rehman said that richer nations of the world need to pay “reparations” to other countries like Pakistan that have smaller carbon footprints yet bear the brunt of climate change disasters.

One-third of Pakistan is under water. Frankly, no one has seen this kind of downpour & flooding before,and no one country can cope alone with the multiple, cascading effects of extreme weather, climate events. The monsoon pattern pic.twitter.com/ymawtZKtb6

Last month, the UN issued a flash appeal for $160 million US ($210 million Cdn) to support Pakistan’s flood response — and many countries have answered the call, including Canada. The federal government recently announced that $5 million in funding will be sent to Pakistan for humanitarian assistance.

But Siddiqi, author of In the Wake of Disaster: Islamists, the State and a Social Contract in Pakistan, said foreign countries shouldn’t characterize these pledges as “some form of charity … out of the goodness of their heart.”

“We emphasize quite a lot, as scholars of disaster studies, that there’s no real event as a natural disaster,” she said.

“There is, sometimes, a much bigger element, which is entirely constructed as a result of the decisions and the choices … that powerful people and institutions in society [have] made.”

It’s a climate crisis — and God forbid, we might see more of these in future.-Shazia Marri, Pakistan’s minister for poverty alleviation and social safety

That’s why she doesn’t believe these floods in Pakistan should be seen as an isolated event, but rather as part of the legacy of British imperialism in South Asia.

“There is a long history of exploitation … and the use of these areas in Pakistan and in other parts of the world.”

About 33 million people have been affected by the devastating floods, including at least three million children.

Shazia Marri, Pakistan’s minister for poverty alleviation and social safety, said the numbers and the catastrophe are a nightmare for any government to handle.

“I think Canada’s population is around about 38 million,” she told Galloway. “So that is a whole nation, a country’s population, that is displaced in Pakistan.”

Marri said Pakistan was “completely unprepared” for the situation, despite extreme weather cases becoming more of a global norm due to climate change.

“We do understand that there is climate change and whatever happens around the world and whatever emissions are used, we are going to get worst affected,” she said. “But we never realized that this is going to be as bad as it is today in Pakistan.”

LISTEN: Why Canada must act in wake of Pakistan flooding

Although she thanks the UN and other nations for assisting Pakistan, she also hopes they take the floods as a warning of how close to home a similar story could hit them soon.

“It’s a climate crisis — and God forbid, we might see more of these in future,” she said.

It’s not just the flood’s destruction that’s causing people in Pakistan problems. According to Manisha Kulkarni, a medical entomologist and associate professor at the University of Ottawa, the stagnant flood waters are also a critical breeding ground for disease-carrying mosquitoes.

“The females, they lay their eggs on the surface of the [stagnant] water,” she told The Current. “So they need the water for the larvae — which hatches the eggs — to develop. They’re completely aquatic.”

Kulkarni said a mosquito’s breeding cycle can take just over a week for a larvae to grow into a flying adult. Coupled with the average high temperatures in regions like Pakistan, the mosquito population can grow very quickly.

As soon as the juvenile mosquitoes hatch from the eggs, they’re able to go and find a host.-Manisha Kulkarni, medical entomologist

Kulkarni added that mosquitoes in South Asia could carry and spread diseases like dengue fever and malaria — potentially as soon as they hatch.

“As soon as the juvenile mosquitoes hatch from the eggs, they’re able to go and find a host,” she said. “And they do tend to stick quite close to the same kind of area where they initially bred.”

“So you do find these kind of hotspots or clusters of transmission of diseases like dengue … and then that can spread in that vicinity quite quickly.”

These spreads could be magnified by the destruction caused by the floods, as well as malnourished survivors without access to clean drinking water forced to drink dirty floodwater instead.

Marri said the government is working to provide survivors with mosquito nets, tents and plastic sheets, to give them some relief from the bugs.

Still, it’s a frustrating side-effect of the floods to deal with, both for survivors and the government.

“What do you say to a family living on the roadside and facing the kind of mosquitoes they have to face — and cattle, that is their economic support … the cows being bitten by mosquitoes?” she said.