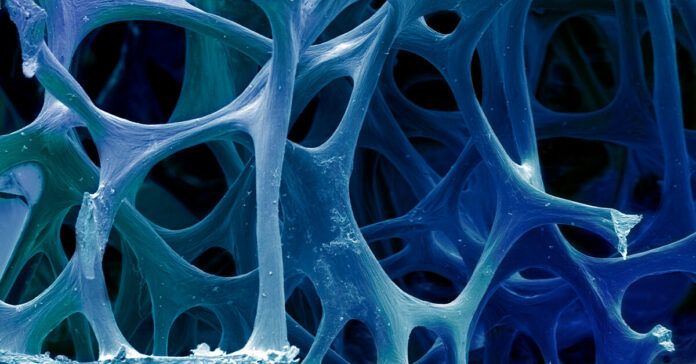 “By characterizing hypertension-induced bone loss in younger mice, we identified a potential new population at risk for fragility fractures. This means that pediatric hypertension may have significant implications later in life, which has yet to be researched. This research is increasing in importance as pediatric hypertension increases in prevalence.”

Osteoporosis is a bone disease characterized by reduced bone mineral density and changes in bone structure. These changes involving the weakening of bones can increase the risk of fractures.

Several observational studies have shown that individuals with high blood pressure or hypertension are at higher risk of fractures due to osteoporosis. In addition, there is also suggesting that certain drugs for high blood pressure can also increase bone strength and reduce the risk of osteoporotic fractures.

“There has been significant clinical evidence that suggests having hypertension is associated with reduced bone quality; however, little research has been done to elucidate how hypertension may contribute to bone health,” Hennen said.

Researchers think an increase in inflammation could be one of the mechanisms that could mediate the association between hypertension and osteoporosis. Previous studies have shown that inflammation contributes to the development of high blood pressure. This involves the accumulation of activated immune cells in the bone marrow that secrete pro-inflammatory proteins.

These activated immune cells and the pro-inflammatory proteins secreted by immune cells can influence the survival and activity of cells involved in maintaining the balance between the synthesis and breakdown of bone tissue. Studies suggest that an inflammatory environment in the bone marrow can modulate the bone remodeling process and cause bone loss.

A gradual decline in bone density and strength typically occurs with aging. The typical aging process is also associated with chronic, low-grade inflammation, and this increase in inflammation could lead to bone loss.

Whether hypertension in young animals results in bone loss similar to that observed during the aging process and how aging, hypertension, and inflammation interact to influence bone loss is not well understood.

To address these issues, researchers at Vanderbilt University compared the effects of hypertension on bone loss and inflammation in young and older mice.

Six weeks after treatment, the researchers obtained lumbar vertebrae from the young and the old mice to assess bone health. They used an imaging technique called micro-computed tomography to evaluate the lumbar vertebrae’s strength, volume, and stiffness.

The researchers then examined the impact of high blood pressure on the inflammatory response in the bone marrow.

The induction of high blood pressure in young mice using angiotensin II resulted in the accumulation of activated immune cells in the bone marrow. Such an immune response activation was absent in the vehicle-treated mice with healthy blood pressure.

Moreover, researchers observed an elevated inflammatory response in the bone marrow in both angiotensin-II and vehicle-treated old mice. These results suggest that aging is associated with higher levels of inflammation, independent of high blood pressure.

Such an increase in inflammation associated with aging could be sufficient to cause bone loss, independent of blood pressure levels. In contrast, hypertension resulted in elevated levels of immune response in younger animals, which may subsequently mediate loss in bone volume and strength.

The researchers found that certain pro-inflammatory factors were elevated in the bone marrow, and understanding how these factors mediate the effects of high blood pressure on bone loss could help develop therapies to prevent osteoporosis in young adults.

The authors caution that these findings do not establish a causal role for inflammation in mediating the effects of hypertension on bone loss in young animals. They also noted that further research is necessary to ascertain whether these findings in mice can be extrapolated to humans.