Fentanyl may impair breathing minutes before its sedative effect kicks in 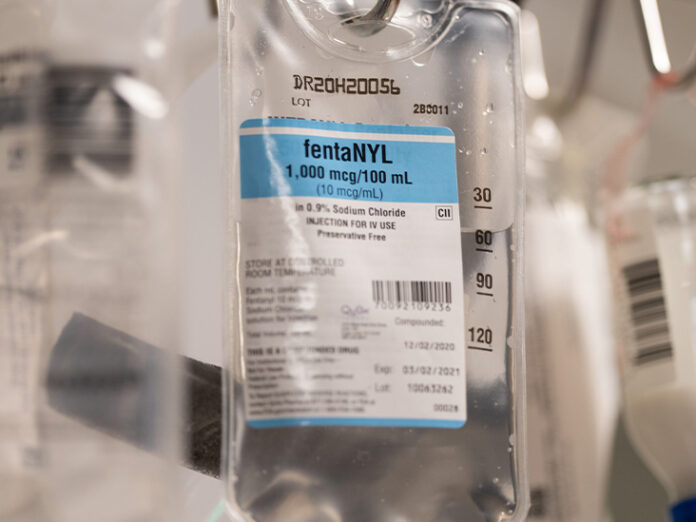 Previous articleFighting superbugs: Compound related to antimalarial drug shows promise
Next articleCould rapamycin be our next weapon in the fight for longevity?
- ADVERTISEMENT -
Advertisements

D​octors use fentanyl to help control surgical pain, but some information regarding proper dosing and monitoring is lacking. Because of its potency, it can also cause serious harm when people use fentanyl illicitly.

A​ recent study examined the impact of fentanyl on the brain in part using electroencephalogram (EEG) monitoring, which records the activities of the brain.

These results indicate the need for careful use of fentanyl and for resources to be available for potential fentanyl overdose.

The study was published in PNAS Nexus.

F​entanyl is a synthetic opioid. It is highly potent—up to 50 to 100 times stronger than morphine. Its primary medical use is to control pain. For example, it can help patients who have extreme pain after surgery. It is also one of the drugs frequently used in patients undergoing general anesthesia.

F​entanyl can be addictive and is one medication that can be extremely dangerous when used illicitly. When people take too much fentanyl, they may stop breathing, which can lead to death in some cases.

Researchers of this particular study noted that “fentanyl and its analogs are involved in approximately 20% of all overdose deaths.”

While we have some information about the effect of fentanyl on the body, experts are still working to understand its full effects and how to prevent situations of overdose.

Researchers administered the fentanyl prior to participants entering the operating room. They used devices called respiratory inductance plethysmography (RIP) bands to measure participants’ respirations. They also monitored participants’ brain electrical activity throughout via electroencephalogram (EEG). After they collected a three-minute baseline for participants, each participant received two to three doses of fentanyl. They calculated the dose amount based on ideal body weight.

Researchers discovered that as concentration levels of fentanyl increased, there was also a distinct EEG oscillation. Doctors could potentially use this signal to monitor fentanyl administration of patients receiving fentanyl in the clinical setting and possibly predict respiratory depression.

They further found that respiratory depression happened several minutes before participants had changes in reaction times.

Respiratory depression also started at concentrations 1,700 times lower than amounts that cause sedation measured by reaction time. T​his means someone could already have reduced breathing before they even start displaying changes in behavior.

Dr. Christopher Gay, the founder of Alaska Center for Pain Relief Inc., who was not involved in the study, told Medical News Today that “Reaction times and blood oxygenation levels initially remained normal despite both the depth and frequency of breaths decreasing. Interestingly, the decrease in breathing depth and frequency began to occur at concentrations of fentanyl that were 1,000 times less than those that caused sedation.”

“The study is exciting because we are able to see the brain impact even before there is any clinical indication that something is wrong.”
— Dr. Christopher Gay

T​his study adds to the growing information about the impact of fentanyl and the caution surrounding its use. However, the study only included 25 participants, indicating the need for more comprehensive studies and follow-ups.

Further research could recreate these findings and confirm the unique EEG biomarker that experts noted in this study.

D​r. Gay noted that this form of monitoring might be particularly helpful in assessing risks in groups receiving high levels of opioids or opiates for pain relief.

“A population that might benefit from this approach would be chronic pain patients who receive high-dose opiates, such as those with cancer pain. Quantifying the levels at which they have increasing risk may provide more confidence to prescribers that they are not likely to cause harm to themselves.”
— Dr. Christopher Gay

“To be clear, I would not advocate utilizing this approach to increase medication unnecessarily in other patients. However, in patients that have no other options, such as cancer pain or palliative care settings, this may be a great tool,” he added.

Dr. Kelly Johnson Arbor, medical toxicology physician and the co-medical director at National Capital Poison Center, who was also not involved in the study, offered her thoughts on the study’s impact as well:

“The results of this study may help anesthesiologists and surgeons titrate fentanyl in a safer and more accurate manner for patients undergoing anesthesia.”

“This [study] confirms that any dose of fentanyl can be toxic and deadly, even if it does not cause visible sedation… In addition, the results of this study will hopefully promote more awareness and discussions of the dangers of illicit fentanyl use, as well as enhanced availability of naloxone for layperson use.”
— Dr. Kelly Johnson Arbor