More
HomeCardiologyCan monkeypox cause heart problems? One case study says it may

Can monkeypox cause heart problems? One case study says it may 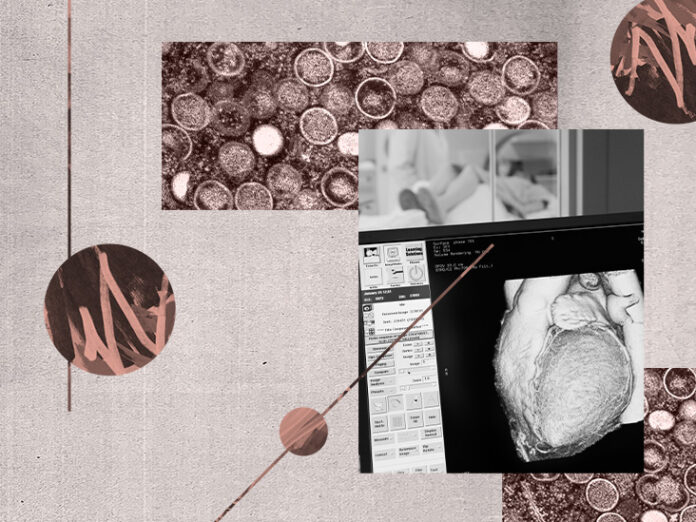 Previous articleChildren more likely to disclose mental health issues to a robot, study shows
Next article‘Polypill’: What it is and how the drug combo can reduce cardiovascular deaths
- ADVERTISEMENT -
Advertisements

Just as with SARS-CoV-2, the virus that causes COVID-19, as more time passes and the virus continues spreading, officials pick up on more possible symptoms and complications monkeypox can cause.

In a report that appears in JACC: Case Reports, researchers covered a case of monkeypox possibly being linked to acute myocarditis, which occurs when the myocardium — the heart muscle — becomes inflamed.

While this can potentially be a life threatening condition in more severe circumstances, the patient, in this case, made a full recovery.

Monkeypox is a zoonotic virus, meaning it is a type of virus that can spread between animals and humans. According to the (CDC), monkeypox belongs to the same virus family as the variola virus, which causes smallpox.

Monkeypox has been around for decades, but cases were primarily confined to different regions of Africa. However, monkeypox began making news over the past few months when there was an outbreak of the virus that quickly spread outside Africa.

Some of monkeypox include:

Recently, the virus has often spread through sexual intercourse, but it can also spread via other forms of close contact.

The patient in the case report sought medical treatment after feeling ill for 5 days. According to the authors, the male patient reported symptoms of “malaise, myalgias, and fever, followed by the eruption of multiple swollen and umbilicated cutaneous lesions on his face, hands, and genitalia.”

The 31-year-old patient took a PCR test to confirm the monkeypox diagnosis, and then he went home. Three days later, the patient went to the emergency room because he woke up during the night experiencing a chest tightness that radiated to his upper left arm.

The authors report that the patient still had visible monkeypox blisters at this time, and doctors administered a variety of tests to check for heart issues.

After an ECG showed abnormalities, the providers did bloodwork and discovered that the patient had elevated levels of C-reactive protein, creatine phosphokinase, high-sensitivity troponin I, and brain natriuretic peptide. These specific blood tests indicated a cardiovascular problem.

Between the abnormalities on the ECG and the irregular blood work, the doctors performed a cardiac magnetic resonance study and diagnosed the patient with acute myocarditis.

After spending a week in the hospital, the patient recovered and was discharged.

While the patient had a SARS-CoV-2 infection 2 months before contracting monkeypox, the researchers suspect the monkeypox illness may have caused acute myocarditis in this case.

According to the study authors, “there have been few cases of histologically confirmed myocarditis, and viral myocarditis caused directly by SARS-CoV-2 has not been definitively confirmed but assumed because of epidemiologic context.”

Since the patient had already recovered from COVID-19 and was still presenting with monkeypox symptoms, the doctors believe monkeypox was the source of the heart illness.

Additionally, the authors note that monkeypox is a virus closely related to others that “already have an established direct or indirect association with cardiac tissue injury.” For example, smallpox has been associated with cardiovascular problems.

“We believe that reporting this potential causal relationship can raise more awareness of the scientific community and health professionals for acute myocarditis as a possible complication associated with monkeypox. [It] might be helpful for close monitoring of affected patients for further recognition of other complications in the future,” comments Dr. Pinho.

“While it is an interesting case, it’s important to note that myocarditis is rare but not unexpected with viral illnesses. Given that myocarditis is largely identified by symptoms similar to those in this case study, it is likely already on the watch list for a patient presenting any viral illness. I don’t believe this paper changes how primary care providers would view or treat their patients that are presenting signs of monkeypox.”

Dr. Jonathan Fialkow, chief of Cardiology and deputy director at Baptist Health’s Miami Cardiac & Vascular Institute, also spoke with MNT about the case. His views are similar to Dr. Balboni’s, and Dr. Fialkow was not surprised that a patient with monkeypox experienced this issue.

“While we don’t have much long-term experience with large populations of people infected with monkeypox, all viruses have a risk of causing myocarditis, and the family of viruses in which monkeypox sits have been known to do so,” said Dr. Fialkow.

“The absolute numbers remain low and currently doesn’t appear to be a particularly high risk in monkeypox relative to other viruses,” he reassured us.