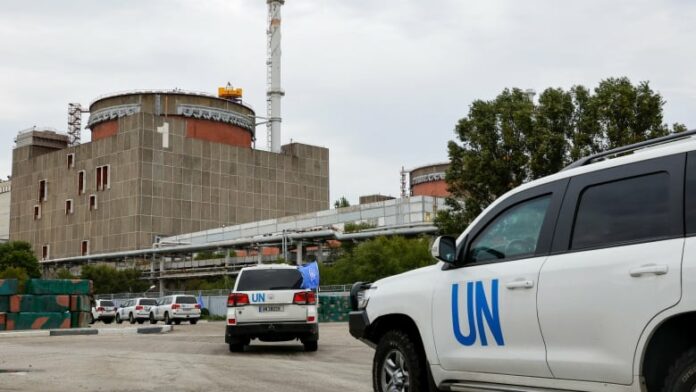 Shelling on Tuesday damaged a backup power line at the Russian-held Zaporizhzhia nuclear power plant (ZNPP) in Ukraine, which has already lost all four of its regular power lines, the UN nuclear watchdog said on Wednesday.

“Of the three backup lines between the ZNPP and the thermal power station, one is now damaged by shelling, while the two others are disconnected, senior Ukrainian operating staff informed IAEA experts present at the plant since last week,” the International Atomic Energy Agency (IAEA) said in a statement.

There was no immediate impact on the plant’s operations, as it had been disconnected from the electricity grid since Tuesday when another reserve line was switched off in order to extinguish a fire, the IAEA said.

The UN atomic watchdog agency urged Russia and Ukraine to create a nuclear safety and protection zone around the Zaporizhzhia power plant to prevent a Chornobyl-level disaster after inspectors found shelling has damaged six different areas in the plant — some close to reactor buildings.

The plant was now relying on its sole operating reactor to power its cooling and other safety functions. It also had emergency diesel generators available if needed, but the UN agency had concerns about the risk of those failing.

The shelling damage occurred the same day as the head of the IAEA urged Russia and Ukraine to establish a “nuclear safety and security protection zone” around the Zaporizhzhia plant amid mounting fears the fighting could trigger a catastrophe in a country still haunted by the Chornobyl disaster.

“We are playing with fire, and something very, very catastrophic could take place,” IAEA Director General Rafael Grossi warned the UN Security Council in a meeting via video link on Tuesday, days after leading an inspection visit to the plant.

In a detailed report on its visit, the IAEA said shelling around the Europe’s largest nuclear power plant should stop immediately.

“This requires agreement by all relevant parties to the establishment of a nuclear safety and security protection zone” around the plant, it said.

The report also recommended the ZNPP’s off-site power supply lines be re-established as soon as possible to ensure energy was available at any time.

Experts say the reactors at Zaporizhzhia are designed to withstand natural disasters and even plane crashes, but the unpredictable fighting has repeatedly threatened to disrupt the cooling systems.

WATCH | ‘Every night there is shelling’ says resident of embattled Mykolaiv:

Frequent shelling has driven out much of the population of Mykolaiv, Ukraine, a city on the country’s southern coast. Those who remain are surviving with the help of foreign aid. They say they are scared, but hopeful.