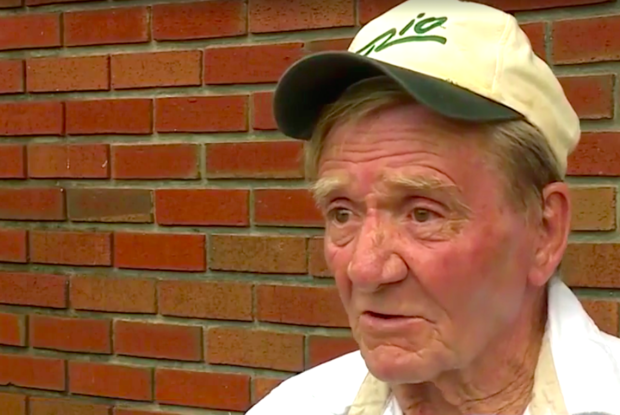 Next articleWhen She Ran Away at Age 18, Her Parents Thought She’d Joined a Cult. The Truth Was More Horrible.
- ADVERTISEMENT -
Advertisements

Lt. Charles Plitt is a police officer in Weaver, Alabama who always tries to help the community avoid problems. For many years, Lt. Plitt urged people to think smart by never letting strangers in the car and never picking up hitchhikers. Despite his years of advice, Lt. Plitt found himself breaking one of his cardinal rules by picking up a hitchhiker. The decision panned out better than he could have ever expected, with Lt. Plitt certain it was one of the best decisions of his life.

Lt. Plitt was off-duty and bringing home a new lawnmower when he saw an old man walking on the side of the road. Immediately, he became concerned, since it was an extremely busy road. “I noticed an older gentleman walking southbound on 431 dressed nicely, but walking very slow and he appeared exhausted. An 18 wheeler flew by and the wind almost knocked him over,” Plitt said in a post to Facebook. “I rolled my window down and asked him if he was o.k. and he looked up at me and said he couldn’t go any further. He told me “I tried, but I just can’t make it….I can’t walk no more.”

The man accepted a ride with the police officer. It turns out Lt. Plitt had picked up 70-year-old James Wright , who had been on his way to visit his wife in the nursing home just like he did almost every day. But Wright’s car had broken down and without the money to repair it, Wright simply started walking every other day to see his wife. Wright told Lt. Plitt that he had recently had a stroke.

“I asked him where she was and he informed me of the nursing home she was in, so I told him I would take him there. After he got in, I thought back to how many times I tell people to be cautious about picking up strangers and about being very careful about picking up hitchhikers… but for some reason I knew this situation was different.”

Wright explained that his wife was confined to the nursing home because of her dementia. It turns out that Wright had once served in the U.S. Army for 22 years, which almost moved the lieutenant to tears.

“All I could do is listen and try not to tear up myself… As we pulled into the nursing home he wiped his tears away and shook my hand. He smiled, then thanked me again and with a burst of energy he hurried inside, not looking so feeble or defeated anymore. I pulled away and continued home, but I thought about this encounter with James the whole way back.”

Lt. Plitt shared his experience on Memorial Day, saying that Wright’s service reminded him of the sacrifice that many people had made for America. He is now working to find out if he can fix Wright’s car or if the police department can assist Wright further.