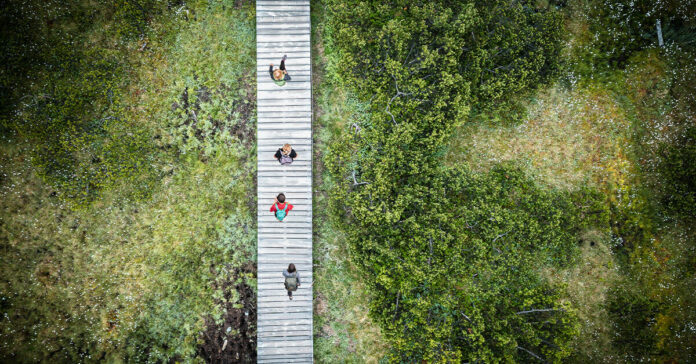 A 2012 meta-analysis, for instance, found an increased risk for schizophrenia for those who live in cities.

Other research, including this , has found that people who live in cities experience increased activity in the , the brain region that regulates emotions including fear and stress.

In a new study, researchers from the Lise Meitner Group for Environmental Neuroscience at the Max Planck Institute for Human Development in Germany explored the mental health benefits of nature.

Researchers sought to find out whether higher rates of mental illnesses in urban areas were related to individuals having less access to nature, or whether certain types of people are drawn to live in certain environments.

The results from the study were recently published in the journal .

To determine their hypothesis, researchers examined the brain activity of 63 healthy participants using functional magnetic resonance imaging (fMRI) before and after the participants took a 1-hour walk in either a forest or a shopping street with traffic.

Study participants included 29 females and 34 males between the ages of 18 and 47. The average age was 27. Each participant was given an fMRI scan. During the scans, they had several exercises for participants, two of which were discussed in the study.

After completing the scans, 31 participants were assigned to go on a walk in a busy street in Berlin, while 32 took a walk in an urban forest. Participants took their walk in 2019 between the hours of 10 a.m. and 5 p.m. Men and women were distributed equally in both groups.

Researchers gave participants a phone to carry during their walk which kept track of their location. Participants also wore wristbands that monitored their electrodermal activity (EDA), heart rate variability (HRV), and heart rate. They were given a bagged lunch they could eat during the walk. After 30 minutes of walking, a phone alarm went off signaling it was time to turn around.

After the participants completed their walks, researchers gave them another fMRI scan while having them complete the same exercises.

“The results of our study show that after only [a] 1-hour walk in nature, activity in brain regions involved in stress processing decreases,” Sudimac said.

“This is an important finding because it demonstrates for the first time a causal relationship between exposure to nature and change in stress-related brain regions.”

Researchers observed decreased activity during both exercises undertaken during the scan. This suggests, Sudimac said, that “the walk in nature may have had a global beneficial effect on the amygdala by increasing its threshold for activation.”

Additionally, brain activity in regions involved in stress processing remained stable and did not increase after a 60-minute walk in an urban environment. This argues against the idea that urban exposure causes additional stress, according to Sudimac.

The research makes the case that walks in nature “could serve as a preventive measure against developing mental health problems” and “buffer negative effects of [the] urban environment on mental health,” according to Suidimac.

She hopes this type of research will also help to build a case for planners to make including accessible green environments in cities a priority.

“Since more than half of the world population lives in cities and urbanization is rapidly increasing, it is crucial for urban dwellers to have a nearby park or a forest where they can [recharge] from [the] stressful urban environment,” Suidimac told MNT.

Since the scans showed decreased activity in brain regions involved in stress processing after a 1-hour walk in nature, could shorter walks also be beneficial?

“We chose the duration of 1 hour because more than that could have been tiring for some participants who are not used to physical exercise,” Sudimac explained.

“There is some evidence that physiological indicators of stress, such as stress hormone cortisol, are lower after — a 15-minute walk in nature compared to a walk in an urban environment, so it would be interesting to examine if shorter exposure to nature also decreases amygdala activity.”

Karen Stewart, a clinical psychologist based in Alabama, not involved in the study, cautioned that there could be an alternative explanation for the decreased activity in brain regions involved in stress processing in participants who took a 1- hour walk in nature, other than the theory they were responding to the green environment.

“It’s too early to claim that is a definitive explanation,” she told MNT.

Possibly, Stewart said, the decrease could stem from the positive effects of physical exercise.

The reason the scans of participants who took their walk on a busy street didn’t show decreased activity in brain regions involved in stress processing, she added, could be because “the negative effects of the urban environment are canceling out the benefits of the exercise.”

The researchers acknowledge that this study relied on a “WEIRD” sample — or participants who were mostly Western, educated, industrialized, rich, and Democratic.

With future efforts, however, the researchers plan to include participants from other ethnic groups and cultural backgrounds “not only to make the results more generalizable but also to examine cultural differences in experiencing nature, since what is considered nature also differs across cultures,” Sudimac told MNT.

With other future efforts, the researchers hope to examine the impact of different natural environments, like rivers, botanical gardens, and mountains, on the brain.

They’d also like to work toward being able to pinpoint specific attributes of nature — certain colors, sounds, or odors — that drive the decrease in amygdala activity “in order to understand why nature restores from stress and, consequently, to make nature-based therapy more efficient,” Sudimac said.

Currently, the researchers are working on examining how a 1-hour walk in nature versus urban environments impacts stress in mothers and their babies.