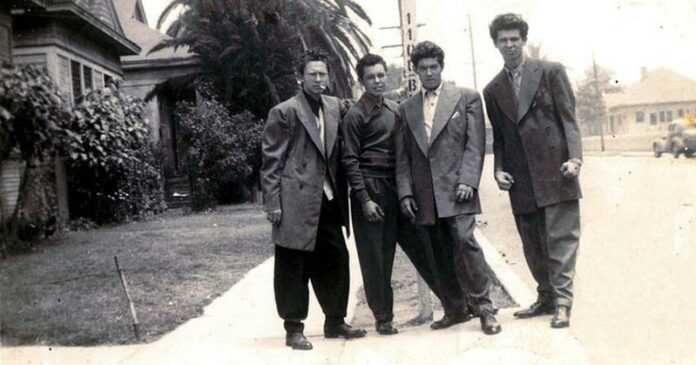 You’ve heard its name memorialized in song, but do you know the very real and very frightening story behind the Zoot Suit Riots that occurred in 1943? At the time, young Latino men who wore pork pie hats, dangling watch chains, and large zoot suits were considered a menace to society. Their crime? Using “too much cloth.”

The riots were the product of some of the most heinous racial violence in the history of Los Angles, spurred on by American servicemen attacking young Latino men for using excess fabric in their suits, something that the young men saw as a source of pride but the servicemen viewed as a snub in the era of wartime rationing. For the week of June 3, 1943, the city of Los Angeles was a war zone.

Zoot Suits As A Status Symbol

A zoot suit isn’t just a big, flashy suit. It is, but it’s so much more than that. In the 1930s, young men who spent their evenings dancing in uptown Manhattan started wearing baggy suits that were perfectly tailored to keep them from tripping over their clothes while accentuating their movements. The shoulders were padded, the jackets that covered them were long, and they were punctuated with long watch chains and wide-brimmed hats. The suits were a sign of excess and economic prosperity in a time when no one had any money. Wearing a perfectly fitted zoot suit was like wrapping yourself in a million bucks even if you didn’t have two nickels to rub together.

Popularized by performer Cab Calloway, the popularity of the look quickly spread to the West Coast, where it was adopted by African-American and Latino youths who saw the zoot suit as a way to stand out in an era when no one wanted them around.