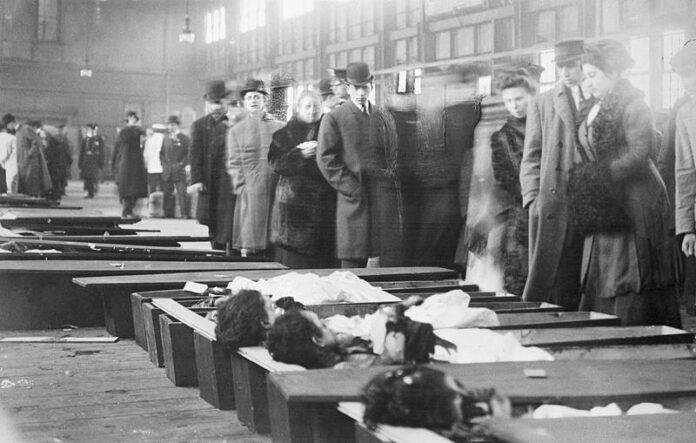 Previous article1916: The First True Supermarket, The Piggly Wiggly, Is Opened By Clarence Saunders In Memphis, Tennessee
Next articleThe Easter Rising: Insurrection Within Ireland During World War I
- ADVERTISEMENT -
Advertisements

The building’s south side, with windows from which workers jumped marked X. (The New York Times/Wikimedia Commons)

On the afternoon of Saturday, March 25, 1911, approximately 600 workers were toiling in the Triangle Shirtwaist Factory when a bin full of rags caught fire. Several of the workers alerted the manager, who tried to extinguish the flames with the building’s fire hose, but no water came out. The valve was rusted shut, and the hose had dry rot. The employees then tried to evacuate through the single working elevator, but since it could only carry 12 people at a time, it would have taken hours to transport all the workers to the ground floor. Not that it mattered: After just four trips, the elevator broke down. Many of the young women who were desperately waiting for their turn in the elevator tried to escape the flames by jumping down the elevator shaft to their deaths.

Most of the other workers tried to flee using the stairs, cramming into the crowded staircase and fighting their way to the bottom only to find that the door was locked, preventing their escape. The door of the only staircase that wasn’t locked opened inward, so no one could open it amidst the mob of workers. Blanck and Harris, along with several workers who were with them on the building’s top floor, escaped to the roof of the adjoining building.

Faced with the horror of burning to death, many of the women trapped inside the building chose to leap from the roof or windows. In fact, the sheer number of falling bodies hampered the firefighters when they arrived on the scene, obstructing their hoses, trucks, and ladders. They set up a safety net to catch the jumpers, but when three women jumped at the same time, the net ripped under their weight. Amazingly, about 460 people managed to escape the fire with their lives, but 146 weren’t so lucky. In total, 58 jumped to their deaths, 36 were found in the elevator shaft, 49 died in the stairwells, and the rest died the next day in the hospital.