The Easter Rising: Insurrection Within Ireland During World War I 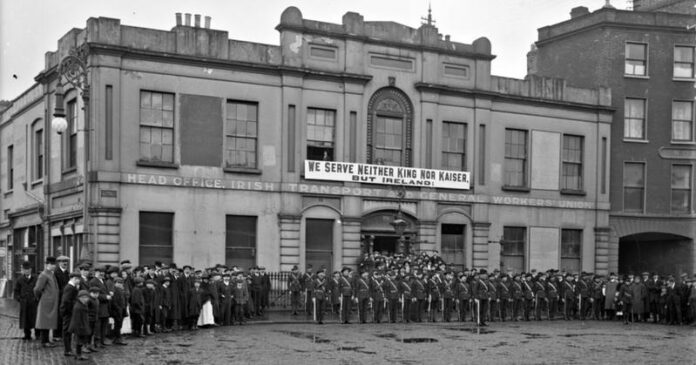 Irish Citizen Army group lined up outside ITGWU HQ under a banner proclaiming “We serve neither King nor Kaiser, but Ireland!” (National Library of Ireland on The Commons/Wikimedia Commons)

On April 24, 1916, an otherwise quiet Easter Monday morning in the middle of World War I, a group referring to themselves as the Irish Republican Brotherhood kick-started a short-lived rebellion to remove the British government from Ireland. The uprising was shut down in just a few days, but its impact was felt for decades.

Ireland In The U.K.

By 1916, British rule was well established in Ireland. They had maintained some kind of presence in the country since the 12th century, but the Acts of Union in 1800 brought Ireland into the United Kingdom, dissolving Ireland’s parliament in Dublin and forcing Irish citizens with government business to travel hundreds of miles to meet with representatives who didn’t understand the culture or people they were governing.

In 1914, John Redmond and the Irish Parliamentary Party pushed the Home Rule Bill through the House of Commons, hoping to return some form of parliament to the Irish people, but when the bill was postponed due to World War I, some Irish activists decided they were tired of waiting. One faction, including the underground revolutionary group called the Irish Republican Brotherhood, never thought the Home Rule Bill went far enough in the first place, demanding total independence from the United Kingdom. Prominent Irish republican Roger Casement even appealed to the German military, England’s adversaries in World War I, for help in the form of weapons and ammunition just ahead of the attack I.R.B. was planning, but the British military intercepted the shipment. Casement was later executed for the incident, which the British government regarded as an act of treason.