More
HomeTrendingThe Assassination Of President William McKinley Led To The Creation Of The... 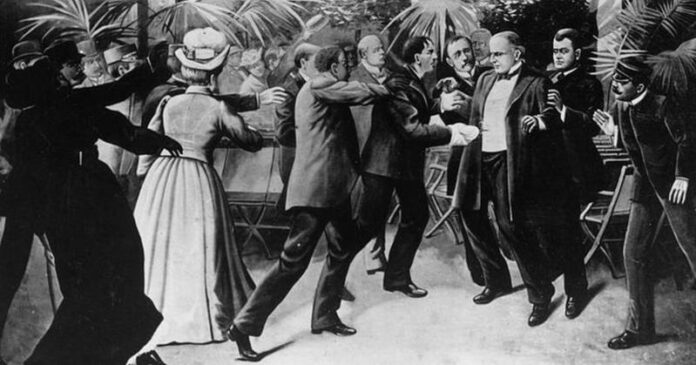 McKinley’s Death And The Secret Service

If Czolgosz had any hesitation, it vanished as he watched the public interact with President McKinley, later observing that everyone “seemed [to be] bowing to the great ruler. I made up my mind to kill that ruler.” At 4:07 P.M., Czolgosz took his place at the front of the line and, when the president extended a friendly arm for a handshake, pulled out his pistol and shot McKinley twice at point blank range. As the president took a few uncertain steps back, a man named James Parker (known to friends as “Big Jim”) emerged from the stunned line of McKinley fans to knock Czolgosz to the ground with a punch to the face.

Only then did the president’s inadequate security detail come to their senses and restrain Czolgosz, beating him until McKinley—by then bleeding profusely from the abdomen—ordered them to stop. McKinley was whisked away to a makeshift hospital at the Exposition, where he underwent emergency surgery, but after a short recovery period that gave the world hope for a full recovery, the president took a turn for the worse and died on September 14, 1901.

It became clear, after three public presidential assassinations in the nation’s short history, that a more official, dedicated, and heavily trained security force was required to protect the highest office in the land. The duty fell, strangely enough, on a division of the Department of Treasury that was, at that time, primarily responsible for investigating counterfeiting cases. Prior to McKinley’s assassination, most presidents opted out of protection by this Secret Service, but in its wake, Congress took the decision out of their hands. They redefined the role of the Secret Service to protect the president above all else, whether the president wants it or not.