More
HomeTrendingThe 21st Amendment: All The Craziest Things That Happened When Prohibition Ended

The 21st Amendment: All The Craziest Things That Happened When Prohibition Ended 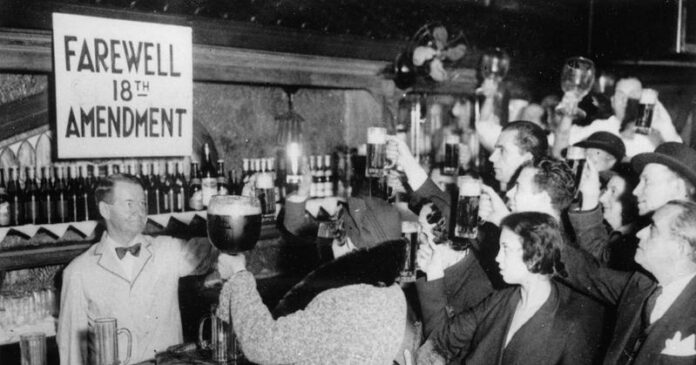 Previous articleMaurice Tillet: The Inspiration For Shrek Had A Condition Called Acromegaly
Next articleFDR Ends Prohibition: The Immediate Aftermath And How The U.S. Settled Into Normalcy
- ADVERTISEMENT -
Advertisements

Prohibition was an era unlike anything America had ever experienced. This 13-year period of nationwide state control over the brewing, transportation, and sale of alcohol changed the everyday life of normal citizens, gangsters, cops, and politicians alike. By the time Prohibition in the United States ended in 1933, the experiment had proven a complete disaster. Criminals were running many of the largest cities in America, trust in the criminal justice system was at an all-time low, and regular people were unsure what to do. After the 21st Amendment was passed, Americans were free again to party down, but not everyone in America was celebrating.

Prohibition was meant to keep the morals of the United States in check and turn down-in-the-gutter drunks into upstanding citizens. What it really did was create financial negative space that was filled by illegal speakeasies and bootleggers, who made money hand over fist thanks to the stringent U.S. law. State governments went broke after they stopped collecting their cut of alcohol sales, and after the Great Depression began in 1929, FDR was swiftly elected to the presidency based on his plan to put an end to Prohibition and ratify the 21st Amendment.

Ratified on December 5, 1933, this amendment repealed the 18th Amendment but still allowed “any State, Territory, or Possession of the United States” to make their own decisions about the sale of alcohol. While it allowed many cities to become legal party towns once more, this amendment also created the dry counties that still exist today.