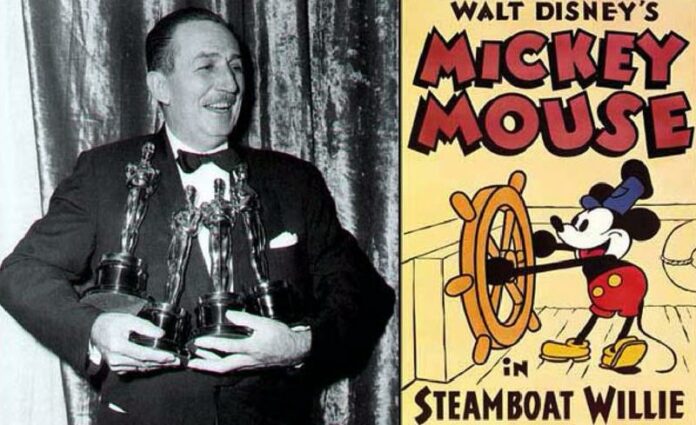 Previous articleThe First Federal Prison For Women Was Opened In 1928, West Virginia (And How It Went)
Next articleThe Pineapple Primary: An Election Violence Threat That Required 500 Federal Marshals
- ADVERTISEMENT -
Advertisements

Steamboat Willie was made after Walt Disney watched the famous film The Jazz Singer. The cartoon took three months to complete with an estimated budget of $4,986 (or $75,923 in 2020 dollars). Walt Disney performed the original voice of Mickey Mouse himself, but only because he was performing all the other anthropomorphic sounds in the first test screening himself.

The screening was very much an ad hoc job, which is hard to believe by Disney standards today, but it was really a homegrown production. Since Walt Disney wanted to do a screening with a test audience to make sure the live sound would be believable, since sound cartoons were at such an early stage, they had to make do with what they had. The audience was seated in the room next to Disney’s office, from which they projected the film to an outside screen that was just a bedsheet. They kept the projector in the office so as to not interfere with the live sound that the team was providing for this screening. The film was literally projected through a window. The sound, then, was to come from behind that bedsheet. A man named Wilfred Jackson played the music on a mouth organ, collaborator Ubbe Iwerks worked the pots and pans, and a man named Johnny Cannon did the foley work, including stuff like slide whistles and the sort.

After the test screening went really really well, Walt Disney would proudly bring the production to his full vision: he contracted a band, a production sound system, and a conductor. But, that first try at synching the sound ended up being an absolute failure, so Disney sold his Moon roadster to pay for another recording and another try. How did they make the first Mickey Mouse cartoon work with sound? Part of the reason the second try worked so well is that they added the bouncy ball on the screen to keep the tempo for the band like a visual metronome. And it was finally finished.