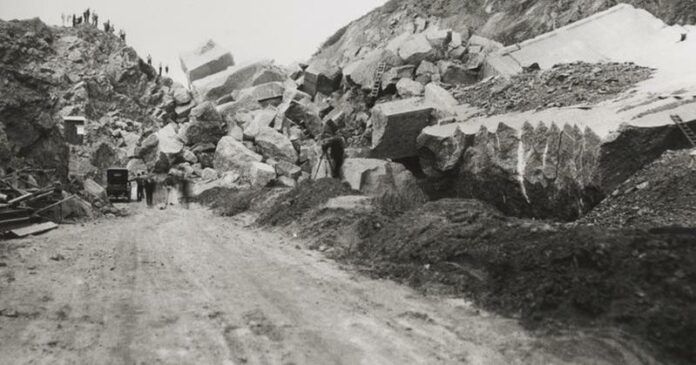 View of the dam looking north, with water in its reservoir, in February 1927. (Stearns, H.T. USGS/Wikimedia Commons)

Almost two years later, the dam keeper noticed a large leak in the west abutment that was spewing muddy water, a sign that the dam’s foundation was washing away. He called Mulholland, who blamed the muddy water on nearby housing development, and that seemed to be the end of that. Just before midnight, however, the dam broke. Anyone who could have given a firsthand account of the moment, including the keeper, his girlfriend, and his young son, was killed instantly, but nearby residents reported hearing and feeling a rumble that they assumed was one of the area’s many routine earthquakes.

An investigation later determined that the unstable ground and surrounding rock formations where the dam was built were at fault for the catastrophe. The inquest cleared Mulholland of any blame, though they noted that “the construction and operation of a great dam should never be left to the sole judgement of one man,” but Mulholland tendered his resignation anyway. He took full responsibility for the disaster and even asked the inquest to hold him entirely accountable. State and national lawmakers soon passed legislation to prevent another such dam failure.

In the meantime, the true extent of the disaster became clear by sunrise on March 13. The rushing water knocked out power lines, wiped away all the buildings in its path, and scrubbed the valley of its vegetation. Initial reports cited 200 fatalities, but later, that number more than doubled. Months after the accident, the official death toll was recorded as 385, yet more victims were discovered in the decades following the disaster. Many were washed out into the Pacific Ocean and/or found on the beaches of Mexico. Over the years, the true death count of the St. Francis Dam disaster was updated to at least 431, but we may never know just how many perished under the horrific flood of water.