More
HomeTrendingPrincess Diana's Death: How It Happened, Conspiracy Theories, And The Aftermath

Princess Diana’s Death: How It Happened, Conspiracy Theories, And The Aftermath 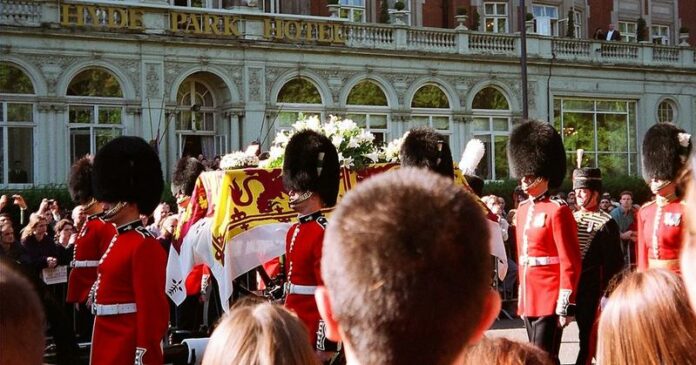 Diana’s coffin, draped in the royal standard with an ermine border, borne through the streets of London on its way to Westminster Abbey. (Paddy Briggs/Wikimedia Commons)

Her royal subjects thought her life was a fairy tale, but Princess Diana was trapped in a nightmare. Behind the glitz and glamour, she struggled to maintain her marriage to a man who didn’t love her while raising two children and supporting a variety of noble causes. Following her divorce from Charles and extraction from the royal family, it looked like Diana was going to get the life she deserved, but only a year later, on August 31, 1997, she was dead. In the decades following her death in the Pont de l’Alma tunnel in Paris, questions have been raised, conspiracies have been concocted, and the world has become a much darker place.

On July 29, 1981, Diana Frances Spencer became Diana, Princess of Wales. She married Prince Charles, the heir apparent, after a brief engagement that saw the world fawn over her. How could we not? Diana was gorgeous and kind, and in interviews, she seemed to be just as gobsmacked by her own fairy tale as everyone else.

Behind the scenes, however, things weren’t all they were cracked up to be. Diana was the third wheel in her own marriage, the other woman to Camilla Parker Bowles, an ex-girlfriend from Charles’s youth whom he had never stopped loving. By 1989, Diana became aware of Charles and Camilla’s ongoing affair, but it’s likely that they had never stopped seeing each other. As her marriage fell apart at the seams, however, Diana’s star was rising among people across the Western world. She performed extensive charity work, acting as a patron for dozens of organizations while working to destigmatize HIV and AIDS.