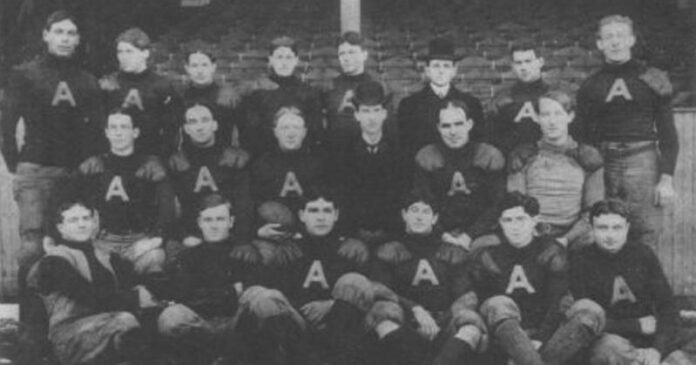 Before the National Football League formed in 1920, American football looked very different. The ball was round, there were few rules and even less protective equipment, and it was generally a lawless endeavor. In fact, there were no professional football players until 1892, just 10 years before the sport’s first world series.

Unaffiliated with the N.F.L. you watch every Sunday nowadays, the National Football League that formed in 1902 was fairly misnamed, encompassing only three teams from Pennsylvania. In fact, two of those teams—the Athletics and the Phillies—were from the same city (guess which one!), leaving the Pittsburgh Stars to round out the roster. That doesn’t mean, of course, that they were the only teams in the country playing the sport; the National Football League regularly played teams from all around the northeastern United States. In fact, on November 21 that year, they made history when the Philadelphia Athletics played the first ever night football game against Elmira, New York’s Kanaweola Athletic Club. Strangely enough, the K.A.C. was originally a bicycling club that evolved into a professional football team, possibly accounting for the Athletics’s blistering winning score of 39–0.

The First World Series Of Football

The Athletics rode their victory all the way to another historical moment when they banded together with players from the Phillies to form an even more confusingly named team called simply New York to play in football’s first ever world series. This new team wasn’t the only part of the game that leaves heads scratching: The “World Series” was in no way a world series, as none of the teams—all five of which were either “from” New York or New Jersey—played each other more than once. In truth, it was little more than a publicity stunt on the part of Madison Square Garden, which had trouble attracting crowds during the winter, but they made history anyway when New York was defeated by Syracuse in what is considered the first indoor professional football game. Syracuse went on to win the series.