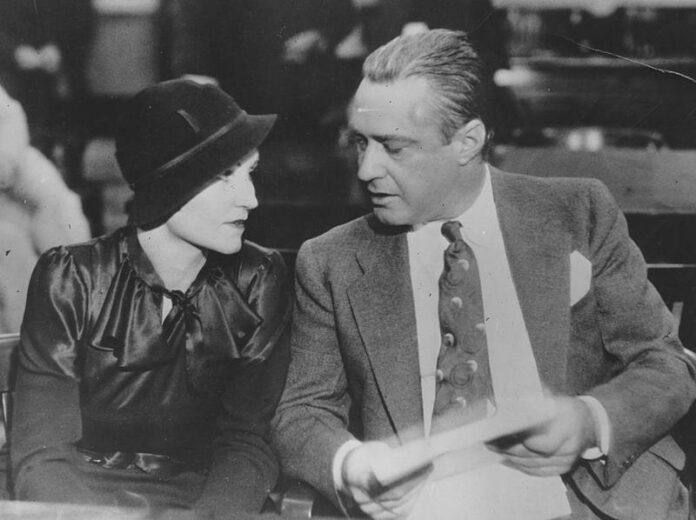 American gangster George Kelly Barnes (1895–1954), A.K.A. Machine Gun Kelly, with his wife, Kathryn, at their trial for the kidnapping of businessman Charles F. Urschel at the Federal Court in Oklahoma City, October 9, 1933. (FPG/Archive Photos/Get

On October 12, 1933, notorious bank robber, kidnapper, and bootlegger Machine Gun Kelly was sentenced to life in prison. Just who was this semiautomatic man, and what did he do to lose his freedom for good?

When Machine Gun Kelly was born on July 18, 1895 in Memphis, Tennessee, he was given the name George Kelly Barnes. He had a fairly normal upbringing and seemed poised for a perfectly respectable life after enrolling in Mississippi A&M College (now Mississippi State University) and marrying the daughter of a prominent Memphis businessman, but she left him with their two sons after he fell in with local bootleggers. He was arrested several times, but his stints in jail only provided him with introductions to other criminals who enabled him to level up to bank robbery.

In 1929, Barnes moved to Oklahoma City, where he met Kathryn Thorne, the mistress of a local bootlegger and outlaw in her own right. Her greatest talents, however, were her marketing skills. After she married Barnes, she pushed her new husband to buy a machine gun and crafted the Machine Gun Kelly persona that made him famous in the newspapers. She even gathered up spent cartridges from his target practice sessions and handed them out as souvenirs to speakeasy patrons, telling folks they were a token of appreciation from her husband. Barnes was actually still little more than a petty bootlegger at the time, but under Kathryn’s influence, he added more bank robberies to his resume and soon found himself named public enemy number one by the F.B.I.

By 1933, the couple was on top of the criminal world, but in July, they went too far. They plotted to kidnap Oklahoma City oil tycoon Charles Urschel for $200,000 ransom, but Urschel was smarter than they were. He used audio clues to figure out his location and took care to leave fingerprints on anything he could, so after he was released following the receipt of the ransom money eight days later, he handily led the F.B.I. right to the Kellys’ lair. They donned disguises and hid out with a friend, but the feds were one step ahead of them, and they soon found themselves in custody. After a swift trial, both were found guilty and sentenced to life in prison, though Kathryn was released in 1958 and spent the next 30 years living the quiet life of a hospital bookkeeper. Machine Gun Kelly died of a heart attack at Leavenworth in 1954.