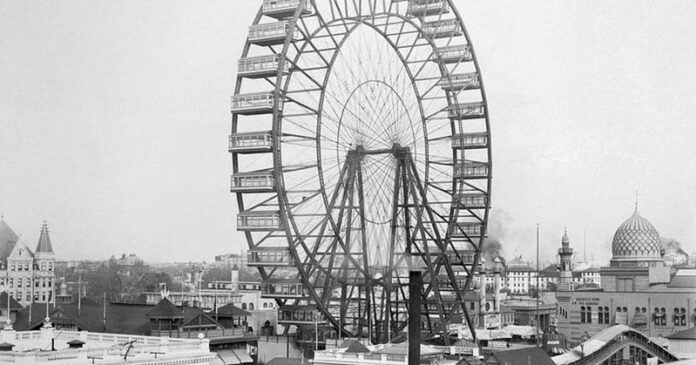 The 1983 World’s Columbian Exposition in Chicago was organized by Daniel Burnham, who was determined to outdo the recently unveiled Eiffel Tower, and Ferris, who had initially been hired only to inspect the steel beams used to construct World’s Fair buildings but overheard Burnham’s grumblings, thought he had just the ticket (for selling lots of tickets). He quickly sketched a massive steel wheel supported at its center by two steel towers that carried riders around its axis and high enough for a bird’s eye view of the entire fair, but Burnham wasn’t nearly as excited about his design as Ferris was.

After Burnham declared the idea unsafe, Ferris came back with a revamped design, the endorsements of several highly respected engineers, and the promise of $400,000 from local businessmen to cover the construction costs of his giant wheel, which had the potential to rake in dough for the fair. Burnham really had no choice but to approve construction of the wheel, which reached 250 feet in diameter, weighed more than 89,000 lbs., and featured 36 carriages that could carry 60 passengers each for a whopping total capacity of 2,160 per ride. After it opened on June 21, 1893, more than 1.4 million people rode the Ferris Wheel during the World’s Fair at 50 cents a pop, and the attraction remained open until the wheel was torn down in 1906. Today, Ferris wheels are a staple of amusement parks, county fairs, and festivals, and larger, permanent Ferris wheels like the London Eye are huge tourist attractions.