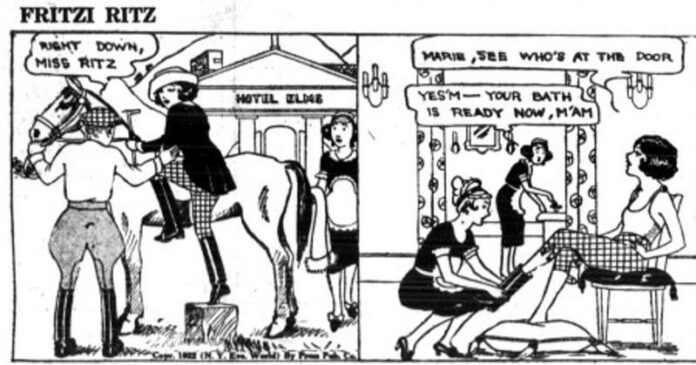 It’s always difficult to imagine the adult figures of our childhoods as young people themselves, but it’s an uncomfortable truth that even the most responsible mom you know had her wild days, even if they only consisted of one out-of-control spring break. Readers of the comic strip Nancy, about a plucky child cared for by her thirtysomething aunt, might be equally surprised to learn that levelheaded Aunt Fritzi was once not only the focus of the strip but also a boy-crazy, roaring ’20s flapper.

Larry Whittington’s Fritzi Ritz, which debuted on October 9, 1922 in the New York Evening World newspaper, told the story of fun-loving 19-year-old actress living in New York City and working for a kindly cheapskate named Mr. Blobbs. Fritzi lived with her parents, but the majority of the stories happened at her workplace or relaxing at the beach or the mountains.

Much as the real women she represented were perceived, the young flapper cared little about anything but fashion, dancing, money, and men. She had a steady boyfriend named Ted Nichols and then another named Wally, but she was constantly pursued by the wealthy Bobby Bonds. In 1939, after she became Aunt Fritzi, one comic suggested she was getting married, but the blessed event didn’t occur until 2012. Talk about a long engagement.