Nearly 8 million people in New York City had a much earlier wake-up call than usual Tuesday morning when Flash Flood and Tornado Warnings triggered Wireless Emergency Alerts on cell phones across the warned areas of the Big Apple.

A line of thunderstorms packing torrential rainfall first prompted a Flash Flood Warning for 7.7 million people across the Five Boroughs at about 4:30 a.m. after 1.5 to 3 inches of rain had fallen in a short amount of time, with the possibility of another 1 to 1.5 inches before the storm moved out of New York City.

Minutes later, the same line of storms began to show signs of rotation, prompting the National Weather Service to then issue a Tornado Warning for parts of Brooklyn near Coney Island and portions of Queens near Rockaway Beach.

A Tornado Warning was in effect for portions of Brooklyn and Queens early Tuesday morning.

While the Tornado Warning was allowed to expire by 5 a.m., the Flash Flood Warning remained in effect until 7:30 a.m. as the heavy rain continued into the start of the morning commute.

All lanes of the eastbound Long Island Expressway were closed in Queens near 60th Street because of flooding on the highway early Tuesday morning.

The Cross Island Parkway in Queens, New York, flooded due to heavy rain on Tuesday morning.

A cold front sweeping across the Northeast will provide a continued risk of showers and thunderstorms on Tuesday.

According to the FOX Forecast Center, the cold front will team up with an upper-level area of low pressure to draw moisture northward from the Gulf of Mexico, yielding additional flash flooding concerns Tuesday from western New York into New England. 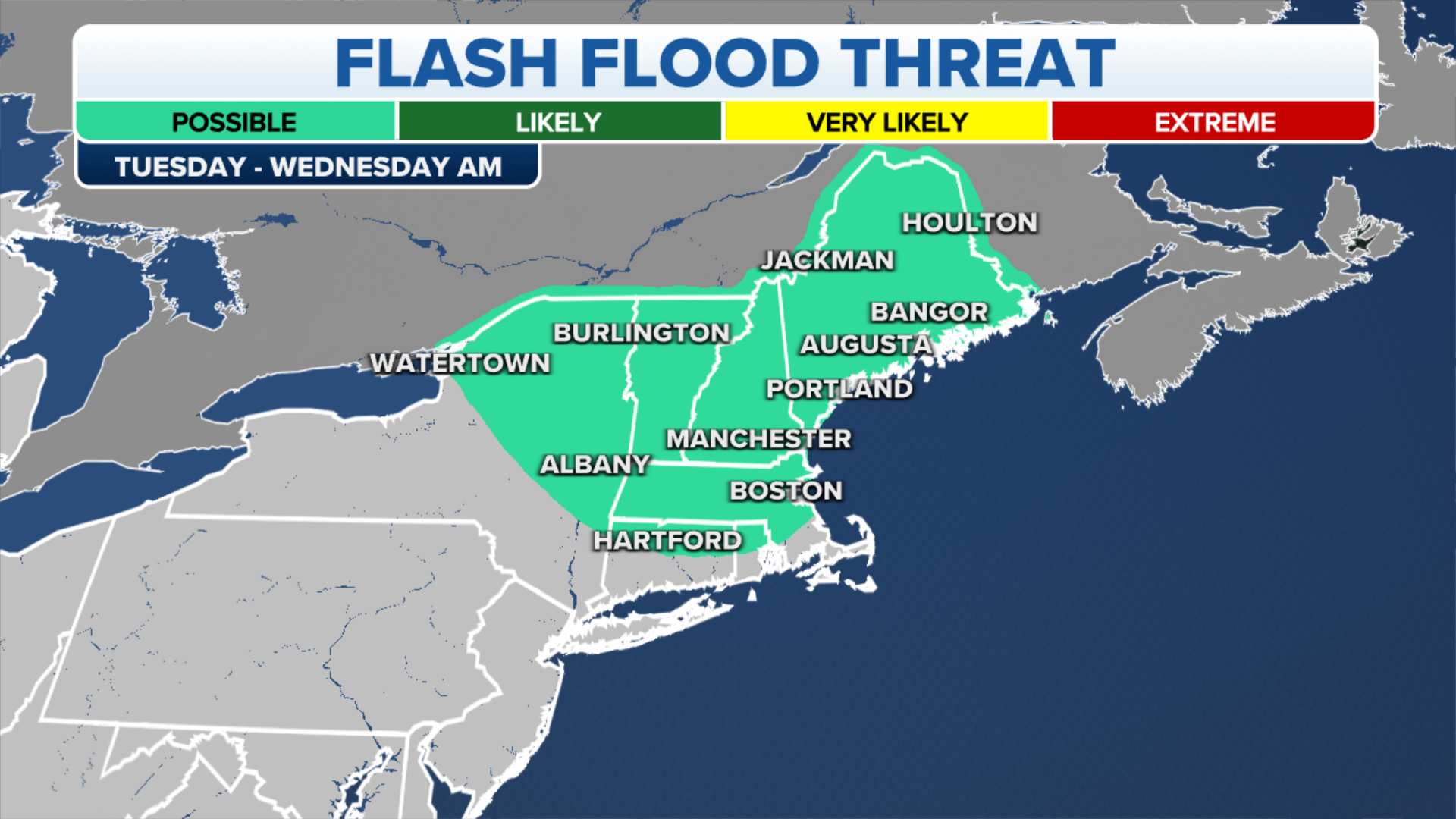 HOW TO WATCH FOX WEATHER ON TV

Thunderstorms capable of damaging wind gusts, hail, and tornadoes are possible from Eastern New York into parts of New England.

“The red bull’s-eye is where we believe that we will end up seeing not only some of those downpours, but also some of those damaging winds as well,” FOX Weather meteorologist Jason Frazer said. “Places like Lebanon, Glens Falls, Albany, New York, Manchester, even extending into Springfield and those of you just west of Worcester all could see the greatest chance for some of the severe weather.”

The storms will diminish after sunset, though a lingering shower or isolated thunderstorm is possible in the interior Northeast overnight and into Wednesday morning on the backside of the storm system as it pushes into the Canadian Maritimes.