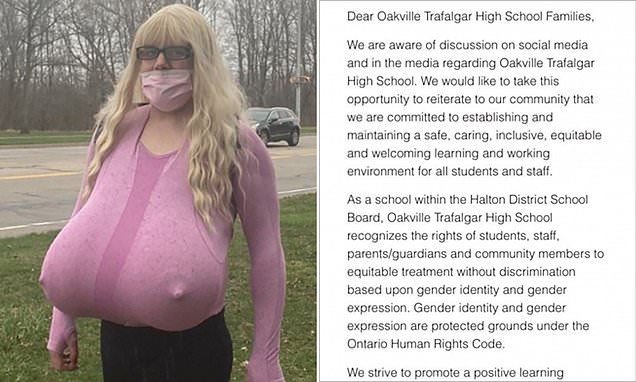 Previous articleJudy Blume: The Young Adult Author That Got You Through Puberty
Next articleAdam Levine Just Responded to Rumors He Cheated on His Pregnant Wife: ‘I Crossed the Line’
- ADVERTISEMENT -
Advertisements

A Canadian high school teacher has sparked controversy after pictures emerged of her wearing large breast prosthetics while teaching students.

Kayla Lemieux, a Manufacturing Technology teacher at Oakville Trafalgar High School in Ontario, has been pictured online taking classes while wearing the huge prosthetics, which stretch her clothing and stick out prominently.

Ms Lemieux, who began transitioning from being male to a female a year ago, has gone viral online after students took photos and videos of the teacher, seemingly without her knowledge.

In response, the high school has doubled down and defended their employee, writing to parents and explaining why they support Ms Lemieux’s gender expression, Reduxx reports.

The school is said to be expecting protests when it opens on Monday since the photos went viral.

In a statement to parents, the school said: ‘As a school within the Halton District School Board (HDSB), Oakville Trafalgar High School recognizes the rights of students, staff, parents/guardians and community members to equitable treatment without discrimination based upon gender identity and gender expression.

‘We strive to promote a positive learning environment in schools consistent with the values of the HDSB and to ensure a safe and inclusive environment for all students, staff and the community, regardless of race, age, ability, sex, gender identity, gender expression, sexual orientation, ethnicity, religion, cultural observance, socioeconomic circumstances or body type/size.’ Some students have recorded images of the trans teacher at Oakville Trafalgar High School in Ontario, Canada and put them on social media: pic.twitter.com/QzsFtqauZq

During one class, Ms Lemieux was filmed operating machinery while wearing her large prosthetics

Images emerged of her online, thought to be taken by students while she was teaching them

Students photographed the teacher on their phones and shared the images, with many online saying Ms Lemieux’s prosthetics are not appropriate for a school

Although some on social media were supportive of the alternative body shape created by Ms Lemieux, many disagreed that it was appropriate in a school setting.

One user online described her prosthetics as ‘hilarious’.

They wrote: ‘I’m sorry but this is hilarious and nothing you can say will change my mind.’

But several others said that the presentation of femininity was ‘misogynistic’.

Another wondered whether the prosthetics meant she has ‘the largest bust in Canada’.

The school pointed out to parents that it is subject to the Ontario Human Rights Code, which protects gender identity and expression as human rights.

HDSB Chair Margo Shuttleworth told the Toronto Sun that staff are looking at ‘going through creating a safety plan’ to ensure the Oakville Trafalgar High School teacher’s security as they prepare for potential protests when the school opens for classes Monday.

‘This teacher (who teaches shop) is an extremely effective teacher,’ said Shuttleworth. ‘All the kids really love being in the class.’

The school is expecting protests and anti-protests when the school opens tomorrow.