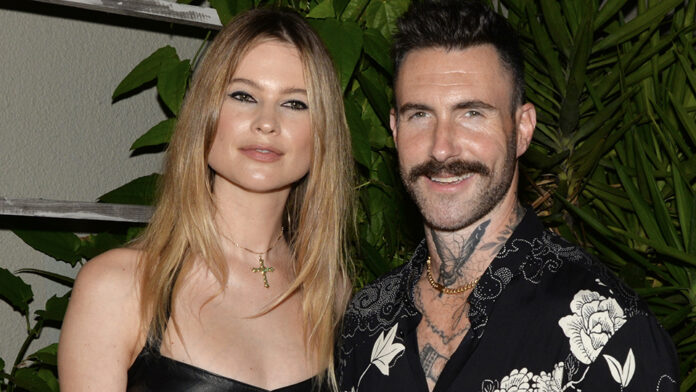 Less than a week after announcing their pregnancy, there are rumors that Adam Levine cheated on Behati Prinsloo and asked if he could name their child after the woman he had an affair with.

Adam and Behati married in July 2014 after almost two years of dating. They welcomed their first child, a daughter named Dusty Rose, in 2016. Their second child, a daughter named Gio Grace, was born in 2018. News broke that Adam and Behati were expecting their third child together after the Victoria’s Secret model was photographed with a baby bump in Santa Barbara, California, in September 2022. Days later, Behati confirmed the news with an Instagram photo of her and her baby bump. “Recent,” she captioned the post.

In an interview with Entertainment Tonight in November 2021, Behati revealed that she wants five children with Adam. “We always knew we wanted a second one,” she said at the time. “So I think for me … when I had two babies under the age of 2, I was just like, ‘Don’t even think about it!’ I do also want five kids. But don’t even think about it.” She continued, “Never say never. We want a big family. Who knows? We’re leaving it up to fate and just what happens. What will happen, will happen. So there are no limits to it.” Behati also confirmed to Entertainment Tonight at the time that she and Adam were thinking of having a third child. “I think it’s just kind of where we are in our life. And with COVID too, I was just seeing [my daughters] together, like, ‘Maybe we should have a third just to have more kids.’ Because it was so sweet to see [them together]. But then, I don’t know. Never say never,” she said.

Three days after Adam and Behati announced their pregnancy, however, rumors sparked that the former Voice judge had cheated on his wife with an Instagram model. So…did Adam Levine cheat on Behati Prinsloo? Read on for what we know about Adam Levine’s cheating rumors and at least two women have said about his infidelity. Did Adam Levine cheat on Behati Prinsloo? Three days after Behati announced her pregnancy, Instagram model Sumner Stroh posted a TikTok video, in which she claimed she had an affair with Adam and he asked to name his baby after her. “Essentially, I was having an affair with a man who is married to a Victoria’s Secret model,” Sumner said. “At the time, I was young, I was naive. Quite frankly, I feel exploited. I wasn’t in the scene like I am now, so I was definitely very easily manipulated.”

Sumner then shared a screenshot of direct messages between her and Adam. “Seeing u in person I was like…I’m fucked,” Sumner wrote to Adam, who responded, “You are 50 times hotter in person. And so am I.” Sumner continued in the TikTok, “Adam and I were seeing each other for about a year. After I stopped talking to him over a period of months, this is how he came into my life.”

Sumner shared another screenshot of a direct message from Adam in which he asked if he and Behati could name their third child after her. “Ok serious question. I’m having another baby and if it’s w boy I really wanna name it Sumner. You ok with that? DEAD serious,” Adam wrote. Sumner continued in the TikTok, “I was like, ‘I’m in hell. I have to be in hell at this point.’ My morals were unknowingly compromised. I was completely manipulated.”

Sumner then explained why she went public with her story. “I wanted to deal with this privately. I never wanted to come forward because obviously I know the implications in doing what I do, making money the way I do and being an Instagram model, so being tied to a story like this, I know the stereotypes,” she said. “I had sent some screenshots to some friends I thought I trusted and one of them had attempted to sell to a tabloid. So here I am.” Sumner captioned the TikTok, “embarrassed I was involved w a man with this utter lack of remorse and respect.”

After she posted the TikTok, Sumner wrote on her Instagram Story: “Aware many people will try to fill in the gaps with many false assumptions. I don’t feel like I’m doing any favors, considering the manner this had to go about. It’s a lot to digest but hopefully, at the very least, the truth being out can do some good.”

After Sumner’s TikTok, another woman, Alyson Rose, posted a TikTok video also accusing Adam of cheating on Behati. In the TikTok video, Alyson shared a screenshot of Instagram DMs between her and Adam in which he tells her his birthday is March 18 and that they shouldn’t be talking to each other. “I shouldn’t be talking to you you know [that right]?” Adam wrote, to which Alyson responded, “Yeah but if we are just friends I think appropriate.”

She continued in the TikTok video, “I have a lot more that was said that was not appropriate. I just didn’t feel comfortable posting everything and I never wanted to post any of this. Just like the other girl said, the only way this would’ve ever came out is if somebody ever posted it.” She added, “A lot of my friends knew and they were shocked. I’m really happy and I have a really great life now, so if there are any other girls who have experienced this with him, which I’m sure they have, I just think they should post it because I feel really bad for his wife and nobody deserves this.”

In a second TikTok video, Alyson shared another screenshot of DMs between her and Adam in which Alyson tells him, “I’m so weird too and only listen to metal lol,” to which Adam responds, “Said no hot chicks ever other than you.” Alyson replies, “Lmaoooo. I’m like a total weirdo,” to which Adam writes back, “Love that. Witchy.

@sumnerstroh embarrassed I was involved w a man with this utter lack of remorse and respect. #greenscreen ♬ original sound – Sumner Stroh

What was Adam Levine’s response to rumors he cheated on Behati Prinsloo?

After Sumner’s TikTok, Adam issued a statement to TMZ, where he denied he had an “affair” with Sumner but took “full responsibility” of his inappropriate behavior with her. “I used poor judgment in speaking with anyone other than my wife in ANY kind of flirtatious manner. I did not have an affair, nevertheless, I crossed the line during a regrettable period of my life,” his statement read. “In certain instances it became inappropriate. I have addressed that and taken proactive steps to remedy this with my family.

He continued, “My wife and my family is all I care about in this world. To be this naive and stupid enough to risk the only thing that truly matters to me was the greatest mistake I could ever make. I will never make it again. I take full responsibility. We will get through it and we will get through it together.”