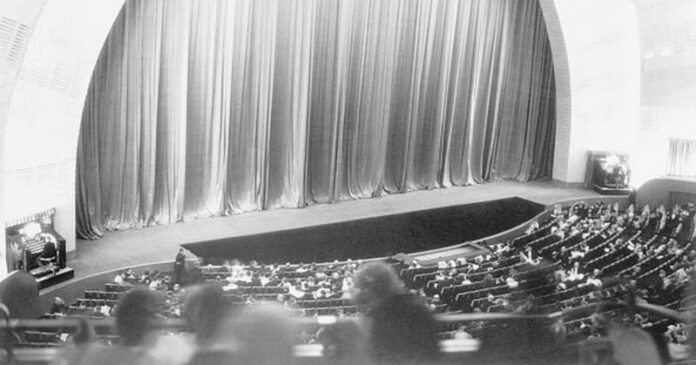 In 1928, John D. Rockefeller, Jr. acquired a vast lot in the middle of Manhattan with the intention of using most of it for a new opera house, but it was not to be. The stock market crash of 1929 brought the plans for the opera house down with it, so Rockefeller decided to create a brand-new type of entertainment experience, consisting of a 6,200-seat vaudeville theater called the International Music Hall and a movie theater about half that size called the R.K.O. Roxy. After the Radio Corporation of America moved in with plans to use part of the building for their very own Radio City, however, those names faded away as the whole building became known as Radio City and the vaudeville theater as the Radio City Music Hall.

The famed music hall is a true work of art, with a stage built to mimic the setting sun 66 feet deep and 144 feet wide, at the front of a house where every seat is the best since there are no columns to block the view. Its soaring ceilings reach an astounding 84 feet, its gold curtain is the largest in the world, and its custom organ uses pipes ranging anywhere from a couple of inches to 32 feet in height that are so plentiful that they must be kept in 11 different rooms. The hall’s elevator system was considered a technological marvel at the time, to the point that it’s said the U.S. Navy copied its design for their aircraft carriers during World War II and kept the hall under its own guard so nobody else could do the same.