More
HomeTrending1916: The First True Supermarket, The Piggly Wiggly, Is Opened By Clarence...

1916: The First True Supermarket, The Piggly Wiggly, Is Opened By Clarence Saunders In Memphis, Tennessee 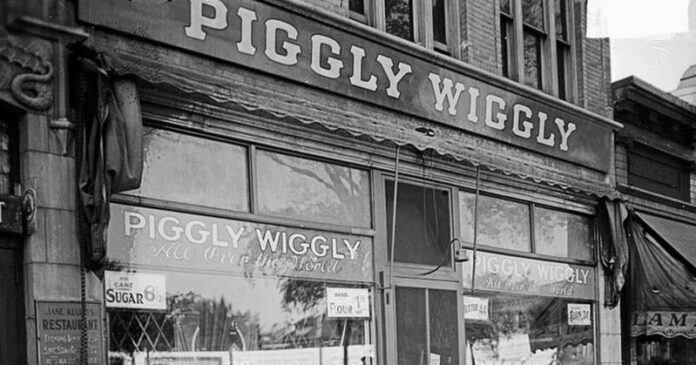 Unless you’re fancy and get yours delivered, modern grocery shopping means trawling the aisles, picking out the perfect avocado or triumphantly pulling the gallon of milk with the furthest expiration date from the back of the case. It wasn’t always like that, though. The “self-service” grocery store was ushered in by Clarence Saunders in 1916 with Piggly Wiggly, the first true supermarket.

Prior to 1916, the grocery list was even more all-important than it is now. Rather than wandering around lush displays, shoppers simply handed their list to a clerk, who filled their order from bulk bins in a mysterious back room, hidden from the eyes of customers. In some ways, the Instacart era is a throwback to this system of outsourced commerce, but it was quite costly, requiring a large staff to keep up with demand. Clarence Saunders recognized this flaw, and he saw an opportunity.

Saunders was born in 1881 in Amherst County, Virginia, motherless from age five and deep in poverty. As a young man, he worked at a grocery store in Clarksville, Tennessee, where he earned the knowledge that allowed him to rise ever higher through the ranks of the grocery business. By 1916, having noted the inefficient system of interaction between grocery shoppers and clerks compared to other retail businesses, he purchased his own grocery store at 79 Jefferson Street in Memphis and completely reconfigured the interior. He pulled out the long counters and replaced them with shelves, which he arranged to form a winding aisle leading shoppers through the store and to a cashier, ready to tally their bill. On September 6, the first Piggly Wiggly was officially in business. When a reporter asked him why he had chosen the name, Saunders once answered, “So people will ask that very question.”